This is directed towards those who believe vaccines are linked to autism or cause autism in some way.

I want you to imagine a world in which two things happen:

1) Vaccines prevent disease (which they do).

2) Vaccines cause autism (in the real world there is no evidence of a relationship between the two but let’s just pretend) in 1 in 88 children.

In our pretend world where vaccines prevent disease and vaccines cause autism, an anti-vaxxer declines to vaccinate her children citing the reason “I don’t want to risk the chance of my child having autism”.

So she doesn’t vaccinate.

As well as not vaccinating her own children, she convinces other mothers not to vaccinate either. Soon herd immunity drops. Vaccine-preventable diseases return. The risk of children catching and dying from disease rapidly increases.

Even in our pretend world anti-vaxxers believe the risk of a child dying or even a dead child is far better than a child with autism. Even if vaccines were to cause autism in 1 in 88 children – a person who declines to vaccinate due to the fear of autism is saying “I would rather have a potentially dead child than a potentially autistic one”.

I am deeply disturbed that autism is being used as a weapon and a scare tactic in the anti-vaxxer anti-science agenda but I am equally disturbed at anti-vaxxers who fear autism more than disease or death. Why is the thought of a neuroatypical child more threatening than having no child at all?

Anti-vaxxers like to think they’re choosing not vaccinate their child out of love but where is the love when you’re putting your child in harms way because you couldn’t stand the thought of them being autistic? Children deserve love, autistic or not.

Autism. Beats being dead from Polio. 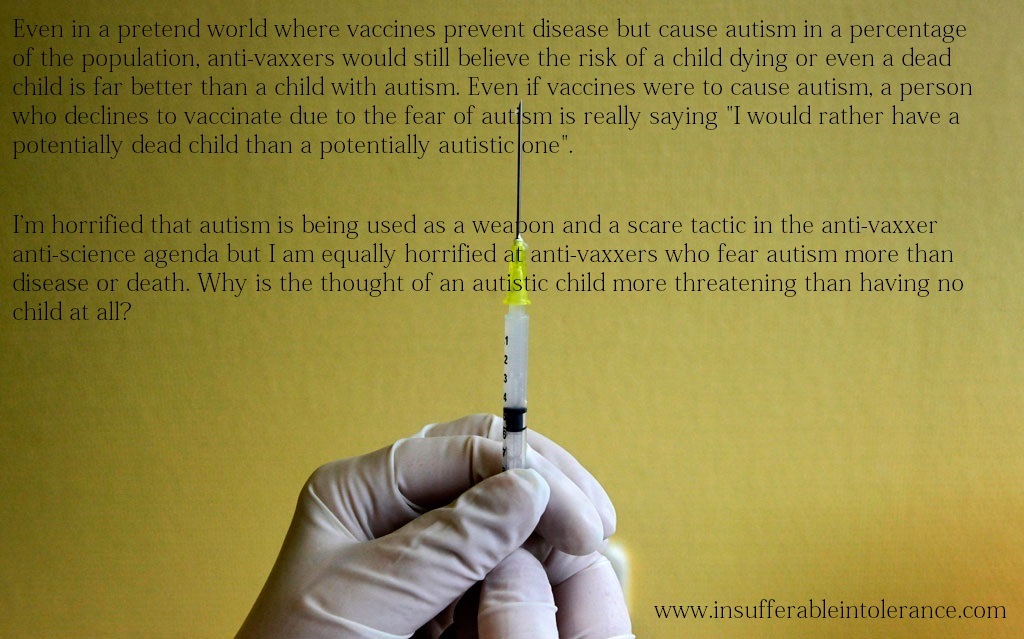 Check out: What does being anti-vaccine really mean.
Vaccine Thought Experiment.

2 Responses to An open letter to those who oppose vaccinations