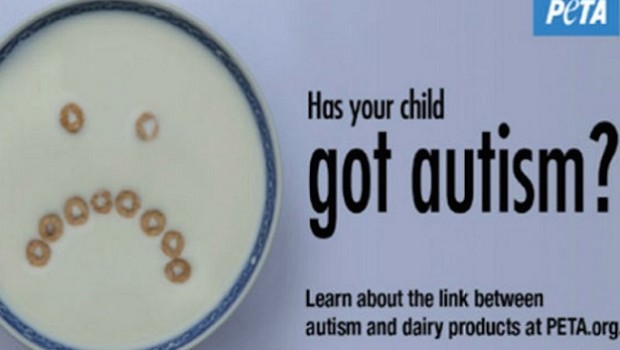 If PETA had actually used facts to tell people about veganism, I would have no issue, but facts is not what they have used. PETA have decided the way to a vegan only world is to grab people while they’re young. Scare mummies into thinking that dairy is linked to autism to stop mothers giving their still developing very young children products rich in calcium.

Well done PETA, you’re a candidate for being entered onto the list of “10 weirdest things linked to autism“.

In an article entitled “Got Autism? Learn about the link between dairy products and the disorder” in an attempt to “alert the public to the connection between this condition [autism] and dairy-product consumption” PETA combines references to piss weak poorly designed studies, appeals to emotion and fear, emotionally loaded unverified testimonies (remember: the plural of anecdotes is not evidence) and blatant factual errors and misleading information. If you don’t already know, the casein they speak about in the article is a component of cow’s milk.

PETA has also released this ad as a billboard. 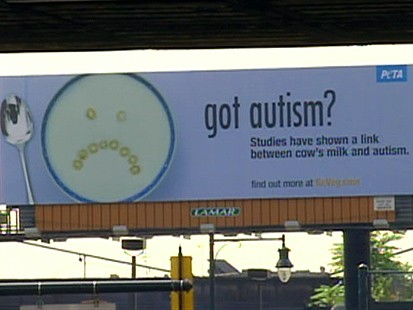 Update: Since bloggers around the world have been thoroughly debunking the sad excuse for an article – PETA has since updated the article with links to the “studies” they previously spoke of, before the update the article had no references. (Note, Emily over at Forbes reports: PETA has, since my post appeared this morning, changed the language of their “feature” from what’s quoted above. Readers can judge the efficacy of these changes for themselves in their post, which is entitled: “Got Autism? Learn about the links between the dairy products and the disease.” Sigh. UPDATE: After an email exchange, PETA has changed the language again to remove the term ‘disease’ and use ‘disorder’ and ‘condition’, instead.)

Since PETA has decided to actually link to the studies in question, let’s have a look at them.

Evidence of the Gluten-Free and Casein-Free Diet in Autism Spectrum Disorders: A Systematic Review.

I had to hunt around the internet for a complete copy of the study but I’ve found it – you can read it here. (Note: ASD stands for Autism Spectrum Disorder).

Our systematic search yielded 14 studies involving the treatment of ASD by restricting the intake of gluten and/or casein. Summaries of these studies revealed that the existing literature base is best described as very limited with respect to the overall scope and quality of the research. In terms of scope, the current database must be considered limited because of the sheer paucity of studies. In terms of methodological quality, the current database contains no studies that are capable of providing conclusive evidence, and only eight studies that utilized a recognizable experimental design. Of these eight, only three studies were of sufficient experimental rigor to qualify at the preponderant level of certainty.

Based on this review, we must conclude that the published studies we located do not support the use of GFCF diets in the treatment of ASD. Additionally, the data from these studies do not support the Opioid-Excess Theory. Until conclusive evidence is found in support of GFCF diets, restrictive diets should only be implemented in the event a food allergy or intolerance is detected.

The DARE (Database of Abstracts of Reviews of Effects): Quality-assessed Reviews) had this to say about the paper: This review concluded that the evidence did not support use of gluten-free and/or casein-free diets in the treatment of ASD. The studies included in this review had very small sample sizes and were of poor quality. The authors’ conclusions appear reliable in reflecting the limited evidence and the full critical summary didn’t spring much hope for the quality and conclusions of the study.

The review they cited not only is filled with poorly executed studies but even those poorly executed studies cannot conclude that a gluten-free/casein free diet has any effect on autistic children. The lack of high quality studies without large methodological issues (such as sample sizes, lack of blinding and non-use of experimental design) means that there is no clear evidence for the use of the GFCF diet as a treatment for autism. In fact this review and (shock horror) this review of studies has found the same thing – the methodologically poor studies, ones that have notable confirmation bias and an insufficient sample population, show some effect, but the properly blinded studies tend to show no effect.

With a few questionable studies under their belt – PETA then ramped up the pseudoscience with emotional testimonials from parents:

Then I realized that Miles’ ear infections had begun when he was 11 months old, just after we had switched him from soy formula to cow’s milk. He’d been on soy formula because my family was prone to allergies, and I’d read that soy might be better for him. I had breast-fed until he was 3 months old, but he didn’t tolerate breast milk very well—possibly because I was drinking lots of milk. There was nothing to lose, so I decided to eliminate all the dairy products from his diet. What happened next was nothing short of miraculous. Miles stopped screaming, he didn’t spend as much time repeating actions, and by the end of the first week, he pulled on my hand when he wanted to go downstairs. For the first time in months, he let his sister hold his hands to sing “Ring Around a Rosy.”

A study conducted in 1999 in North Carolina may hold the answer to why so many parents report changes in their autistic children’s behaviour despite the mounting evidence of the different “therapies” promoted to cure autism (eliminating msg, chelation, parasite cleanses, Miracle Mineral Solution (ingesting bleach), oxygen therapy, stem cells, chemical castration and coffee enemas among others) having no scientific legitimacy or evidence to say they work or are even safe.

The study conducted in 1999 (Sandler et al) outlines their method as follows:

We conducted a double-blind, placebo-controlled trial of a single intravenous dose of synthetic human secretin in 60 children (age, 3 to 14 years) with autism or pervasive developmental disorder. The children were randomly assigned to treatment with an intravenous infusion of synthetic human secretin (0.4 microg per kilogram of body weight) or saline placebo. We used standardized behavioural measures of the primary and secondary features of autism, including the Autism Behaviour Checklist, to assess the degree of impairment at base line and over the course of a four-week period after treatment.

56 children finished the study. The mean total score on the Autism Behaviour Checklist for the secretin group was 59.0, the placebo group was 63.2 at the start of the study. The scoring on the checklist was 0 – 158 – the more impaired a child was, the greater the score. At the end of the study the score for the secretin group had decreased by 8.9 and for the placebo group it had decreased by 17.8.  If the secretin had any effect on the children, we should see a greater decrease in the group who had the secretin injections than in the group that had just saline.

Dr Paul Offit offers an explanation for this phenomenon, “Autistic children injected intravenously with secretin were judged by their parents to have improved, but so were the children who had been injected with the saline salt water solution. This didn’t mean that both secretin and salt water treated autism, it meant that parents who had participated in the study had a strong desire to see medicines make their children better. Parents not only had an emotional investment in the idea that secretin worked, they also had a financial investment, some having spent thousands of dollars to obtain the hormone” (Autism’s False Prophets, Paul Offit M.D).

Despite the study confirming that secretin does not treat autism, as researchers have noted – after they were told the results, 69 percent of the parents of the children in the study said they remained interested in secretin as a treatment for their children.

Confirmation bias, an emotional and financial investment in needing debunked “treatments” for autism to work would explain why the various “treatments” for autism are all promoted to work. Parents need to think these “treatments” work or else they have spent thousands of dollars on useless programs peddled by snake oil salesmen. They don’t want to have to think about the fact they’ve been conned and put their child through harmful programs for no result.

As for PETA – emotionally manipulating people and using autistic children as a way to get people to go vegan, they are no better than the snake oil salesman conning parents out of their money for treatments for a something that doesn’t need curing. Autism is not a threat nor should it be used as a weapon for your hidden agenda.