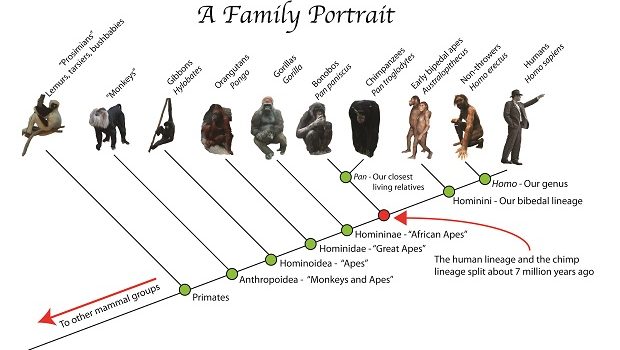 A creationist in my inbox sparked the resurgence of my old forum post onto the Facebook page because – well, if you’re going to tell me “I thought this was a science page”, you need to be prepared to…bring some science.

Spoiler: They didn’t. And the world was shocked.

When we think of Evolution, the first thing that comes to mind is Charles Darwin’s ‘Origin of Species’. A great book that creationist Ray Comfort happened to rerelease with an introduction from himself.

Yes, Seriously. I managed to find a copy, it’s ridiculous.

In the non-creationist version of the book Darwin discusses two main points:

a) New species evolve from ancestral species.
b) Natural selection is the (primary) mechanism for this process.

Evolution is essentially descent with modification, it describes the genetic changes that occur in populations, which over long periods of time leads to new species evolving from ancestral forms. We can chart those changes and relationships on an phylogenetic tree (commonly referred to as the Tree of Life). You can see examples of the phylogenetic tree for the genus Homo here. The Tree of Life Project was created as a means to have all of the data in one spot for ease of reference. You can look up other images on Google. 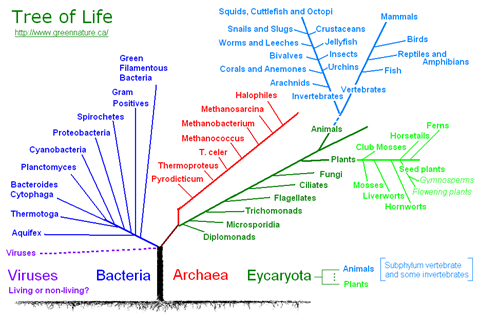 This is a basic tree of life starting with the Three Domains: Bacteria, Archea and Eukarya. Bacteria and Archea are classified as Prokaryotes and the domain Eukarya consists of the Eukaryote species, namely Protists, Plants, Fungi, and Animals. The Endosymbiosis Theory suggests that Eukaryotic cells may have evolved from early Prokaryotic cells.

A more in-depth version can be found at  https://www.evogeneao.com/)

To first understand micro-evolution, we first need to know what a gene pool is. A gene pool is the total collection of alleles present in a population – that is, the total amount of genetic information within a particular species. Micro-evolution is the changes in the gene pool across many generations. The evolutionary time periods involved for micro-evolution are relatively short whereas evolution as a whole to get to the current point as taken millions of years.

Mutations and the rearrangement of genes through DNA recombination can produce a diverse range of allele variables throughout the population. Rearrangement of DNA can happen via several mechanisms.

The bottleneck effect describes a common cause of genetic drift. A natural disaster or chance event leads to the population size decreasing rapidly – such as a mountain collapse, flood, cyclone etc. Particular alleles may increase, decrease or be lost completely after the bottleneck event, simply due to chance. For example, overhunting of the northern elephant seal caused populations to crash in the late 19th century. Populations have since recovered, but genetic variation remains very low and don’t reflect the population before the event occurred.

The founder effect is another cause of genetic drift. When a few organisms from a large population break away and establish a new population, the gene pool of the new population may not accurately represent the original population due to chance Founder effects accounts for the high frequency of genetic abnormalities in certain groups of humans that have been established from a small number of initial colonies. For example, the Amish community in the USA suffer a higher frequency of a rare condition that causes extra fingers and toes than the greater American population. The Amish are descended from a small number of initial colonists that carried the rare genetic abnormality.

Gene flow: Gene flow transfers new alleles into and out of populations due to movement of organisms or their gametes (sex cells). For example, pollinators such as bees or birds may transport pollen between populations of flowering plants or wind-pollinated seeds may be dispersed over long distances between populations.

Non-random mating: Mating is generally non-random in populations, organisms are more likely to mate with neighbours who are closer than those who are further away. Non-random mating leads to genetic change from one generation to the next.

Evidence for evolution:
Biochemistry and molecular biology: One of the basic pieces of evolution is the similarity of all living things. All living things pass on genetic information from generation to generation using the DNA (we have chromosomes which is nuclear DNA, in mitochondria we have mitochondrial DNA, and also chloroplasts have DNA) & proteins & amino acids. We can compare DNA and proteins across groups of organisms. For example genes from chloroplast DNA can be compared across all organisms that photosynthesis. All living things use ATP as an energy for their cells. Here are some links to get you started.

2. Similar Genes: We have been able to successfully map the human genome and compare it with the genomes of others species. Our closest genetic relatives are the chimpanzee and the bonobo without genes differing by only 1.2%. We’re 85% the same as a mouse and approximately 40% the same as a banana. You can look into this further here. Here are some other links to get you started.

3. Comparative Morphology: The comparative anatomy of species adds evidence to the theory that we have been derived from a common ancestor. The skeleton of humans is very similar to that of an ape, both are very different from the exoskeleton of a slater (woodlouse). However, primates and slaters share some basic anatomical characteristics such as bilateral symmetry. Here are some links to get you started.

As well as Homologous structures (mentioned below), the following are also studied:

Analogous structures – body parts/anatomy similar in different organisms because, in convergent evolution, they evolved in a similar environment, rather than were inherited from a recent common ancestor. They usually serve the same or similar purposes. An example is the streamlined torpedo body shape of porpoises and sharks. So even though they evolved from different ancestors, porpoises and sharks developed analogous structures as a result of their evolution in the same aquatic environment.

Homoplastic structures – body parts/anatomy that look similar, but are derived from convergent evolution, meaning that the two organisms displaying homoplasy do not share a common ancestor. Instead, they may have evolved in common environments and the traits arose due to natural selection. This can be seen most prominently in species that have camouflage capabilities, like an insect that can look like a leaf, but has no photosynthetic capability.

4. Homology: Homologous structures are those that share a common origin but may serve different functions in modern species. For example, me, my cat, a bat and a whale share similar structures – my cat, the bat, the whale and I have two front limbs – hands for me, front paws for my cat, wings for the bat and flippers for the whale. Inside those limbs we all have the very same structure: one longish bone on top, connected to two thin bones at the joint, followed by a cluster of small bones called the carpals, and then our digits. We each use our limbs for totally different purposes: the bat flies, the whale swims, my cat walks and I am typing on my computer.

Similar structures like the one described above can be found throughout various different species for many millions of years. Here are some links to get you started.

5. Vestigial Structures: A vestigial structure is one whose original function has been lost during evolution over the years – a good example of this is pelvis bone in a whale and the human coccyx. Here are some links to get you started.

6. Fossil Record: You can look here or here for the human fossil record. Scientists can calculate the age of fossils and categorise them to determine when the organisms lived relative to each other and how old the fossils are. Fossils of the same and different species help use to understand vestigial structures and homogeneous similarities. Here are some other links to get you started.

7. Biogeography: Animals that are the most similar, and are the most closely related, tend to be found in the same regions, because evolutionary change is driven in part by geographical change.

1. Species of finches of the Galapagos islands.
2. Various species of silversword plants restricted to different islands in the chain of Hawaiian Islands.
3. The species of Nothofagus (Southern Beech) in Australia, New Guinea, New Zealand and South America.

Many closely related organisms share patterns of geographic distribution across continents. These patterns of distribution make sense if you have an understanding of continental drift, mountain, and gorge formation. Here are somelinks to getyoustarted.

8. Resistance: Bacteria have a fast life cycle and can produce a new generation every 4 hours. As natural selection acts on each generation this means bacteria can rapidly respond to environmental pressures. When we use antibiotics to kill bacteria, the antibiotics weed out those bacteria with low resistance and only bacteria with high resistance survive and pass their alleles to the next generation. We can also see resistance happen within insect populations when testing new insecticides. Here are some links to get you started. I suggest reading about the Lenski longitudinal E. Coli experiments which will provide a greater understanding of how resistance in bacteria is a form of evolution.

9. Artificial Selection: The breeding of dogs from wolves is a good example of this alongside the selective breeding of crops. Here are some
links to get you started.

10. Parallel Evolution: Parallel evolution occurs when two species that share a common ancestor evolve a similar trait independently of each other such as marsupial and placental moles, flying squirrels, and mice. Here are some links to get you started.

11. Convergence: Convergent evolution is the independent evolution of similar features in species of different lineages. Wings in dragonflies and birds are a good example of this. Here are some links to get you started.

We also have speciation which happens when a new species arise within the population. It can occur in nature or be induced artificially, through animal husbandry, agriculture, or laboratory experiments. Embryology is another example – all vertebrate embryos, including humans, exhibit gill slits and tails at some point in their early development. These disappear in the adults of land dwellers but are maintained in adults of aquatic dwellers, such as fish. Great ape embryos, including humans, have a tail structure that is lost before birth. Here are more links.

All of this information can be found in any first-year university level biology textbook or this short video.

A short note on abiogenesis: Abiogenesis refers to the process by which life arises naturally from non-living matter. Scientists have put forth the hypothesis that life may have arisen as a result of random chemical processes which has produced self-replicating molecules. One of the current hypotheses involves chemical reactivity around hydrothermal vents, here are links to an article and a video to assist you in further understanding.

Several videos on evolution for high-school education and up:

Evolution – Crash Course Biology #20
What is the Evidence for Evolution?
Richard Dawkins: Show me the intermediate fossils!
Introduction to Evolution and Natural Selection

5 posts in 5 days: Things you need to understand about science before talking about it →