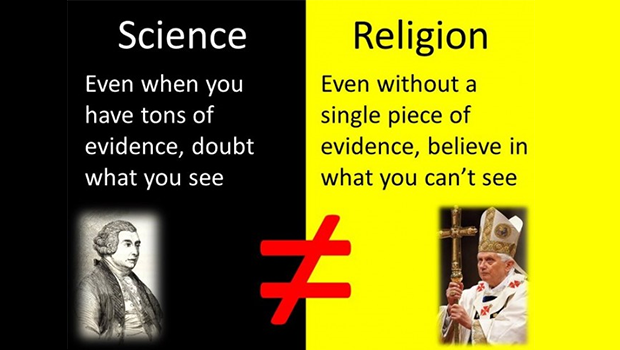 It constantly amazes me that people still have the audacity to assert that science is a religion. Whenever a person says the phrase “Science is another religion” all I hear is “I don’t understand how science works”.

In my last post I discussed why I will always choose science over faith and religion. While I mentioned that science and religion were both methods for understanding the world – science itself is not a religion. If I were to hazard a guess about why people are still saying that science is a religion, I would guess that either they want to place science and religion on the same level playing field – which they shouldn’t be or because they want to discredit science in an attempt to give religion more credibility.

The argument “Science is a religion” falls down for several reasons. A religion  – particularly organised religion – requires the following:

Sacred Objects, Places, Times:
Most religions especially the monotheistic ones have sacred text and places to congregate at certain times. They may have certain “holy” times of the year that are celebrated by believers. Science has none of the above. Science is something everyone can get involved with. Scientists will use various instruments and equipment for different experiments but they aren’t held to be sacred. They are machines designed to do a specific task.

Promoting a moral code:
Science does not ascribe to any moral code nor does it promote any moral codes. Christianity for examples likes to promote moral codes in the form of commandments from the Christian god based on what is written in the Bible.

Prayer and offers to the gods:
Many religions including the monotheistic religions and pagan religions  will promote communication with the believers deity of choice in the form of prayer and chants. Many religions will send offers to the gods in the form of abstinence “saving myself for marriage to appease god”, working with homeless people to get favour with their god and other acts that may make a believer feel they are working through their god to make their god happy with them, some tribes will offer food or an animal sacrifice to appease their god in hopes their god will provide for them. Science does not demand prayer or offers in exchange for things.

A world-view and demand that its believers live by that world-view:
Religion promotes a view of the world (often contained in the book used by the religion) and demands that its followers follow that world-view or their god will be unhappy. Science being a method to find answers to questions promotes no world-view. It can find facts that some may accept but ultimately science forces no-one to do anything they don’t want to.

Faith:
Possibly the largest difference between science and religion is religion requires faith, science does not. Faith is a certainty of things without evidence. Scientists will form a hypothesis and test the hypothesis and if new information is found, they will incorporate the new information into the understanding of the world we are attempting to build. Science unlike religion does not claim to have all the answers – instead it promotes questioning the world around us to find those answers in an impartial way.

Religion is a closed system, it starts with a conclusion (in the case of Christianity: god and the Bible) and creates (without evidence) ways to reach that pre-existing conclusion. Science on the other hand starts with an observation, it will form a hypothesis and test the hypothesis to reach a conclusion. If the conclusion cannot be replicated by anyone else using the scientific method – a scientist will revisit the original hypothesis and testing phase and tweak it and try again. Science is self-correcting, religion will fight and kill to keep the belief that it is right without any evidence at all. 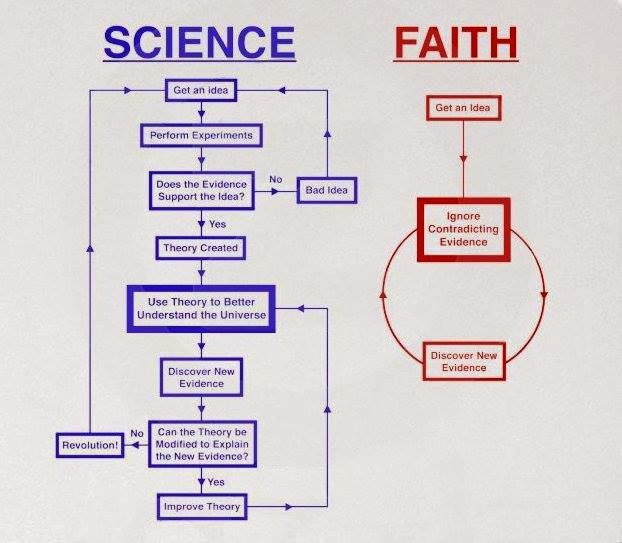