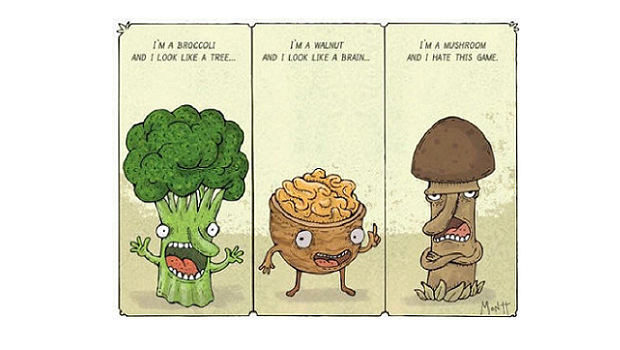 Today’s post in my Alternative Medicine 5 posts in 5 days series focuses on this image: 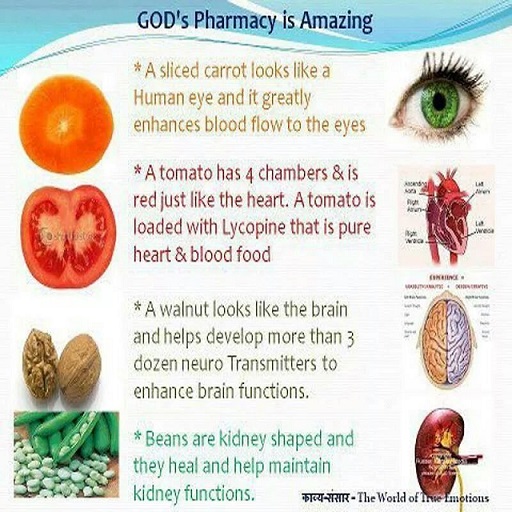 The footer down the bottom of the image states the image originated from “The World of True Emotions” which is a Facebook page with the aim to “have a huge collection of Hindi Poems and Shayari on Love , Romance, Patriotism, Kids, Fun , Nature, Social Issue“.  The image has gone semi viral appearing in my Facebook page feed every five minutes invoking the same level of annoyance as my cat does when she’s feeling needy.

The image is based on the Alternative Medicine/Middle Ages Theological idea of the The Doctrine of Signatures (also known as: Law of Similarities). An idea that was made popular in the Middle Ages, where Christian theologians believed their god created food that looked like a body part to tell us that  it was beneficial to said body part. Basically if it looks like a penis, it is good for your penis. Bloodroot, has a red extract and was promoted to fix problems with blood, walnuts look like brains so they can apparently help with brain issues. With the discovery of modern medical procedures, technological advancements and science based medicine – this is clearly an outdated means of treating illness.

For the rational world anyway.

Naturopaths and other alternative medicine peddlers have latched onto the idea and ran with it as a way to promote the bread and butter of their industry, the fallacy that “Natural equals good and chemical equals bad“. Ironically alternative medicine peddlers have only been able to latch onto this outdated idea because of modern medicine, while humans have being pulling other humans apart for long time to see how we tick – we’ve made more headway in learning about the human body in the last 100 years than we have over the last 1000.

For example, in 1921 German pharmacologist Otto Loewi discovered the first neurotransmitter. Research into neurotransmitters and how they function in relation to the rest of the body has increased since then. In the Middle Ages when the Doctrine of Signatures was popular – neurotransmitters weren’t known, let only understood. Without the modern medicine that alternative medicine despises so much – it couldn’t even make the grandiose claims that walnuts help develop neurotransmitters.

Most people understand that a mushroom won’t cure an earache, even if it does look like an ear. While fruits and vegetables have nutritional value, I feel like I am going to repeat myself over the next few blog posts. Natural isn’t always good, chemicals aren’t always bad and food looking like things isn’t how medical treatment works. According the the Doctrine of Signatures – Kidney beans look like kidneys therefore they must be able to treat Kidney disorders. Except Kidney beans contain phosphates, our kidney can’t remove phosphates very well to the point if you have kidney disease, you are advised to not eat foods high in phosphates (source). High phosphate levels may lower the calcium in your body and cause weak and fragile bones.

And again, I’m not saying switching to a high vegetable diet isn’t good for you. A diet with plenty of vegetables and exercise is great however this woo is less than great. The health effects of food need to be scientifically evaluated and tested – not matched together based on what a person interprets them to look like. A carrot looks like an erect penis but I’m certain men aren’t getting erections from them.

Other posts in my 5 posts in 5 days series:
The Food Babe vs Pumpkin Spiced Lattes
Things you need to understand about science before talking about it
Chlorophyll and sunlight in your digestive system
The Religion of Food Babe

7 Responses to 5 posts in 5 days: The Doctrine of Signatures