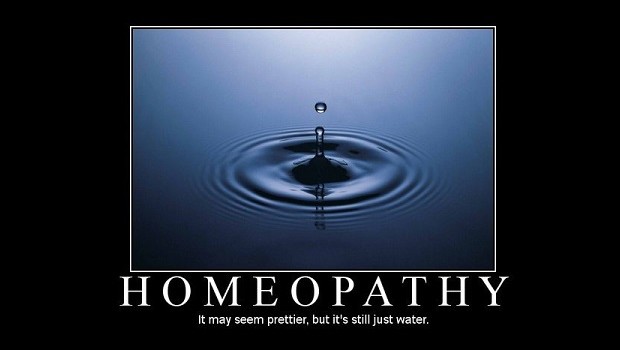 Sorry I haven’t been posting much, I’ve been hella busy with life, universe and everything. I will however, relay a story that happened to me during the week which will be the subject of this somewhat long blog post.

On Sunday morning, I was riding the bus to work when my acid reflex issue decided to rear its foul-tasting head. It was going to be a good 20 minutes before getting into work, so I popped antacid so I wouldn’t have to taste bile and continued rocking out to the second Dethklok album on my iPod. My metal induced bliss was soon interrupted by a tap on the shoulder.

“You know, you shouldn’t take those”
“Those what?”
*points to antacids* “There’s a much more natural solution if you just go here. My homeopath only charges $40 per session”
*hands me over a homeopaths card, which I proceed to rip up*
“This antacid contains Calcium carbonate. Calcium carbonate is commonly found in rocks around the world – so it’s pretty “natural” and it can ease my acid reflex symptoms for less than $2 from my local chemist. So no thankyou”
“But homeopathy can change your life! You know drug companies are only in it for the money”
“Apparently so is your “$40 per session friend”

And it went downhill from there.

For those of you who don’t know what homeopathy is or how it works, here’s a few basic premiers on the industry brought to you by such lovely people as Reasonable Hank, Respectful Insolance, Quackwatch, Ben Goldacre and Three Men Make A Tiger.

Homeopathy Basics:
Homeopathy is the invention of a German doctor named Samuel Hahnemann in the late eighteenth century who promoted the idea that “like cures like” – a school of thought where a substance in its regular form that causes a symptom can be used in diluted form to treat that very same symptom. This notion promotes the idea that the symptoms of a disease (say renal failure) can be cured by substances that when administered in large dosages produce the same or similar symptoms in healthy people. In other words if a herb in large amounts can cause renal failure, that same herb when diluted can cure renal failure. Further to that, the more the herb is diluted – the more potent it is. This has been often called a form of Sympathetic magic.

Following along with me so far? Okay.

How homeopathic “cures” are created:
Homeopathic products can be made from a variety of sources mainly minerals and herbs. If the original substance (the mineral or herb) is soluble, one part is diluted with either nine or ninety-nine parts of water and shaken vigorously by 10 hard strikes against an elastic body or surface (a process that homeopaths refer to as: succussed); if insoluble, it is finely ground and mixed with powdered lactose. Hahnemann believed that when the substances were diluted and then placed under the process of succussion, the process activated the “vital energy” or “vital force”  of the diluted substance and made it stronger and more potent (source).

The original substance (the herb or mineral) is diluted with one part herb and ninety-nine parts water. That substance is then diluted with one part now-diluted herb and ninety-nine parts water and so-on and so-forth until the desired concentration is reached. Dilutions that have been diluted in lots of 100 are designated with the symbols C. (30C, 60C, 200C). Remember back to earlier when we spoke about the “vital energy” of a diluted substances making it more potent?The underpinning framework behind homeopathy is that the properties of the original herb increase the more you dilute it so let’s have a look at the math behind the dilutions to see if the framework has a grain of truth in it.

One popular analogy to put into perspective the absurdity of homeopathic dilutions as presented by Robert L. Park in his book: Superstition: Belief in the Age of Science:

Or to put it more simply: One third of a drop of some original substance diluted into all the water on earth would produce a remedy with a concentration of about 13C (Gleick PH, Water resources, In Schneider SH, ed. (1996), Encyclopedia of climate and weather 2, New York: Oxford University Press, pp. 817–823).

Oscillococcinum, a 200C product “for the relief of colds and flu-like symptoms,” involves “dilutions” that are even more far-fetched. Its “active ingredient” is prepared by incubating small amounts of a freshly killed duck’s liver and heart for 40 days. The resultant solution is then filtered, freeze-dried, rehydrated, repeatedly diluted, and impregnated into sugar granules. If a single molecule of the duck’s heart or liver were to survive the dilution, its concentration would be 1 in 100200. This huge number, which has 400 zeroes, is vastly greater than the estimated number of molecules in the universe (about one googol, which is a 1 followed by 100 zeroes). In its February 17, 1997, issue, U.S. News & World Report noted that only one duck per year is needed to manufacture the product, which had total sales of $20 million in 1996. The magazine dubbed that unlucky bird “the $20-million duck.”

Despite all the math in the world, homeopaths still insist that homeopathy works – to the point where they have created an elaborate method for “proving” a homeopathic “cure” works – uncreatively named “provings“. Ben Goldacre explains the method:

Homeopaths have developed a wide range of remedies over the years, and the process  of  developing them  has come to be called, rather grandly, ‘proving’ (from the German Prufung). A group of volunteers anywhere from one person to a couple of dozen, come together and take six doses of the remedy being ‘proved’, at a  range of dilutions, over the course of two days, keeping a diary of the mental, physical and emotional  sensations, including dreams, experienced over this time. At the end of the proving, the “master prover” will collate the information from the diaries, and this long, unsystematic list of symptoms and dreams from a small number of people will become the ‘symptom picture’ for that remedy, written in a big book and revered, in  some cases, for all time. When you go to a homeopath he or she will try to match your symptoms to the ones caused by a remedy in a proving.

There are obvious problems with this system. For a start,you can’t be sure if the experiences the ‘provers’ are having are caused by the substance they’re taking, or by something entirely unrelated. It might be a ‘nocebo’ effect, the opposite of placebo, where people feel bad because they’re expecting to (I bet I could make you feel nauseous right now by telling you some home truths about how your last processed meal was made); it might be a form of group hysteria (‘Are there fleas in this sofa?’); one of them might experience a tummy ache that was coming on anyway; or they might all get the same mild cold together; and soon.

This method fails on several levels. In scientific clinical trials it is important that the results are protected against any possible forms of bias including selection bias, interpretation, researcher bias, study design and sample bias. performance bias, detection bias, reporting bias, confirmation bias and the placebo effect. Also, clinical trials will compare the proposed medication to a previous treatment or to placebo treatment (a control group that is only receiving sugar pills/saline solutions). Effective clinical trails are randomised – participants are assigned placebo or treatment using a method for random distribution. Additionally study participants and researchers remain unaware of who gets the placebo and who gets the proposed medication so that their bias cannot influence their interpretation of the results – this is called a double-blind study.

While “provings” may take aspects from scientific clinical trails – homeopathy cannot be differentiated from the placebo effect, especially since the math debunks the underpinning framework of homeopathy itself. Avogadro’s constant and the laws of chemistry debunk the notion that the more something is diluted – the stronger it gets. At least in terms of a tangible substance.

Upon realising that there was dogs bollocks chance in hell that even one molecule of the original substance would remain after extreme dilutions such as 30C and above, Hahnemann proposed the “vital energy” framework as outlined above. Just to recap what I introduced earlier on – he proposed that the vigorous shaking after each step of dilution (succussion) leaves behind a “spirit-like” essence—”no longer perceptible to the senses“—which cures disease  by reviving the body’s “vital energy.” Homeopaths have attempted to rectify the debunking by math and assert that even when the last molecule is gone, a “memory” of the substance is retained. This notion has never been proven and if it were true, every substance a molecule of water has ever uncounted might imprint an “essence” that could exert powerful (and unpredictable) medicinal effects when ingested by a person – such as: faeces, urine, menstrual blood, pharmaceutical drugs, bleach, petrol – anything that can be poured down a sink or thrown in the ocean (source).

To re-recap: Herbs/minerals diluted in water an extreme amount of times and struck with force means that the “spirit essence” (ghost?) of the herb/mineral will get stronger when there is less actual molecules of the herb/mineral in the water. I’m assuming by the time there are no more molecules of the herb/mineral in the water – this means the herbs/minerals ghost will be a fucking Super Saiyan – over level 9000 in strength. It’s safe to say that Hahnemann’s homeopathy is nothing more than magical thinking with no basis in science. Remember kids: Correlation doesn’t imply causation.

I was going to look at some of the common tropes used by homeopaths to convince people away from medicine and into homeopathy but this post is quite long, so I’ll leave it for the next post.

An interesting tidbit of more complete weirdness that is homeopathic magical thinking. These homeopaths are the same people who think writing the name of a remedy on a piece of paper can cure you which are (not surprisingly) called homeopathic paper remedies.