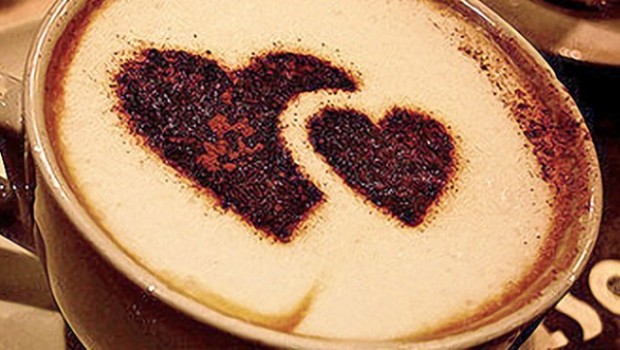 On the weekend I decided to up my game on the writing front and do five posts in five days, partly because my readers are entertained when I call bullshit on viral pictures their friends re-post without thinking and partly because when the same posts make it onto my Facebook feed, I am too damn lazy to write the same response over and over calling out bullshit.

If Spiderman has taught us anything, with great power comes great responsibility or in my case – with an increase in readers, comes an increase in people sending in pseudoscientific images and gagging for me to do a snarky yet informative post debunking said pseudoscientific image. My readers get to display said snarky yet informative post to their friends with cries of “I told you it was shit, please don’t put coffee up your arse”, the friends ignore the blog post because testimonials apparently trump facts and you, my dear readers, cry a little more on the inside.

But never fear, dear readers, I appreciate that you’re attempting to educate your friends away from putting hot beverages up their anuses. It makes me proud.

I was meaning to kick the series off over the weekend but due to my body being a belligerent child, the sport of preacher hunting, all you can eat breakfast buffets, hotels with room service and being stuck in the only place on the planet without access to a book-store – I didn’t get a lot of sleep.

My first post is dedicated to Hannah – a lovely woman who shares a love for pumpkin spice lattes. She sent me this image: 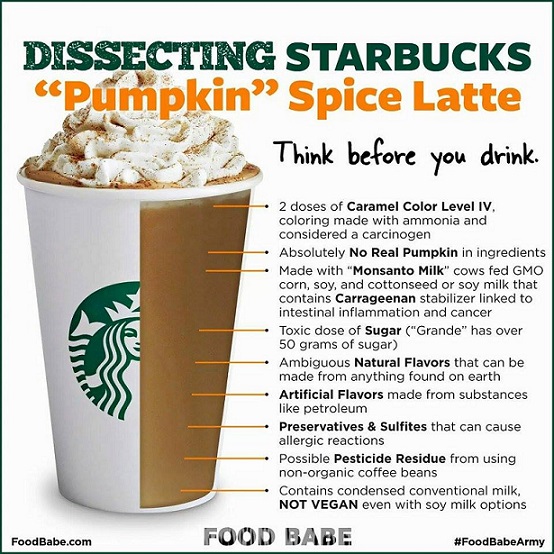 I love the Food Babe, in a “feels better about myself” way. For those of you who don’t know, the Food Babe is the latest addition to the pseudoscientific world. Forbes outright called her an Internet fool. Mark Crisplip discusses Food Babe’s extraordinary ability to fail at basic science. Science-Based Medicine labelled her the Jenny McCarthy of food and since Jenny McCarthy hates vaccines (because of “toxins) but injects a dangerous neuro-toxin into her face – the comparison is quite accurate. The Food Babe hates chemicals – too bad she doesn’t know what chemicals are. Or understand basic chemistry.

The Food Babe has recently lashed out at Starbucks and their Pumpkin Spice Lattes using the above image in her latest ill-informed propaganda against warm liquid vegetable goodness. On the blog post that started it all, Food Babe criticises Starbucks for using Caramel Colour Level IV, a caramel colouring found typically in soda:

“It’s created in a laboratory by reacting corn sugar with ammonia and sulfites under high pressure and temperature, which produces the byproduct 4-Mel.”

4-Methylimidazole is a heterocyclic organic chemical compound formed in the browning of certain foods through the Maillard reaction between carbohydrates and amino-containing compounds. It may also be prepared by the reaction of hydroxyacetone (a chemical reagent used in various organic chemical reactions, a reagent is simply a substance used to bring about a chemical reaction) and formamide (a naturally occurring carboxylic acid) in ammonia. Food Babe never actually states which process Starbucks uses. This is the first fallacy in the image – the idea that all laboratory created solutions are dangerous. I bet she wouldn’t say the same about Aspirin.

In her article, the Food Babe states:

Except the toxicology study was 1) done on mice and 2) said mice were given doses far exceeding the level a human would be able to consume.  In order for humans to reach the equivalent of even the lowest cancer-causing dose in mice, a woman would have to drink 37,000 cans (12 oz) a day for the rest of her life, and a man would have to drink 95,000 cans a day. You really only have a risk of getting a cancer tumor if you consume as much as the mice were given at the smallest dose, which means you will drown yourself by consuming too much liquid first anyway – so never fear!

The various groups are listed below:

“OSHA (the Occupational Safety and Health Administration) classifies 4-MeI as non-carcinogenic: “No component of this product present at levels greater than or equal to 0.1% is identified as a carcinogen or potential carcinogen by OSHA.”

So do American Conference of Governmental Industrial Hygienists (ACGIH), and the NIHs National Toxicology Program (NCP).

The International Agency for Research on Cancer (IARC) hedges its bets and classifies 4-MeI as a Group 2B carcinogen: Possibly carcinogenic to humans—the lowest category other than  “does not.” (source)

The funniest thing about this whole thing is not that Food Babe is scaring people with 4-MEI as a carcinogen but does it freely while posting photos of herself drinking alcohol – a Class 1 carcinogen. You’ve got more risk of developing cancer from wine.

“Absolutely, No Real Pumpkin in its ingredients“, there’s no banana in banana confectionery either. It’s banana flavoring. In fact, the ingredients for the Pumpkin Spice Latte syrup used for flavour is available on Starbucks website, Many products use flavourings instead of base ingredients, you wouldn’t be able to use actual pumpkins in the recipe and still have a consumable drink. Also you can make your own Pumpkin Spice to put in your coffee – it consists of cinnamon, ginger, allspice and nutmeg. No pumpkin at all. “Pumpkin Spice” is just the name of the combination of ingredients typically used in pumpkin pie.

“Monsanto Milk“. There’s the GMO scaring. I almost missed it.

“Toxic dose of Sugar“. 50g of sugar – that’s about 3 tablespoons. It’s a fair bit but considering 1 serving (126g) of red seedless grapes has 20g of sugar in it – still not a reason to scaremonger people away from a beverage. If “sugar content equals bad” is one of your arguments against a drink, stop eating fruit. The daily recommend amount for sugar is about 100 calories per day for women and 15o for men. Doing some quick math, there are 4 calories per gram, that would mean for an adult woman – your daily intake of sugar should be 12.96 grams. Obviously the Pumpkin Spiced Latte is above this but it’s not as high as Food Babe latest fad – Suja Juice which contains 180g of sugar per 6 bottles. The daily recommended intake of Suja Juice as stated on their website? 6 bottles per day.

“Ambiguous Natural Flavours“. This is pretty rich coming from someone whose entire website relies on scaring people with the fallacy “Natural equals good, chemical equals bad“.

“Artificial Flavours made from substances like petroleum“. Artificial flavours are used in nearly all foods – from sweets to breads. They are used to enhance the texture and flavour of the product. But without information about what sort of flavour is used – neither I nor Food Babe can comment on how it was created. Food dyes are derived from aniline, a product of petroleum but food dyes and artificial flavours are different.

“Preservatives and Sulfites that can cause allergic reactions“. The Pumpkin Spiced Latte uses Potassium Sorbate is the potassium salt of sorbic acid, which is a natural organic compound used as a food preservative. Typical usage rates of potassium sorbate are 0.025% to 0.1%, which in a 100g serving is an intake of 25 mg to 100 mg. Acceptable daily intakes for human is 12.5 mg/kg, or 875 mg daily for an average adult (70 kg) (source). Congratulations Food Babe, you’ve just realised natural compounds can cause allergic reactions. Kind of like peanuts.

“Possible pesticide residue from using non-organic coffee beans“. Come back to me when you have some real evidence that non organic coffee beans are being used. In the meantime, let’s have a quick look at the difference between organic and inorganic farming.

Organic farming uses fertilizers and pesticides if they are considered natural (animal waste as fertilizer), but it excludes or limits the use of growth regulators such as hormones and antibiotic. Inorganic farming uses synthesised pesticides and fertilisers, antibiotics and hormones. While there are pros and cons to both farming methods – the organic vs inorganic trope used in pseudoscience relies heavily on “Natural is good and chemical is bad” forgetting that just because something is natural – doesn’t necessarily mean it is safe. Which is the fallacy that Food Babe likes to rely on a lot.

And what the hell is wrong with “conventional milk”? It comes from cows. At least it won’t affect my estrogen levels unlike soy.

Food Babe for all intents and purposes is advocating a better diet – more vegetables, less junk food. That in and of itself isn’t a bad thing. Food Babe however is the product of capitalism. In the modern world to sell her ideals and her subscription service, you need a niche market. You need something that stands out from the crowd of hundreds of health websites. You need fear. Fear is a good motivator. Like all pseudoscientists, Food Babe relies on scaring people to make money. Her website and message is built upon scaring scientifically illiterate people away from medicine by bombarding them with anecdotes and concepts scientifically illiterate people have no idea about. Which is good for Food Babe because if her audience was scientifically literate, she wouldn’t have one.

Other posts in my 5 posts in 5 days series:
The Doctrine of Signatures
Things you need to understand about science before talking about it
Chlorophyll and sunlight in your digestive system
The Religion of Food Babe 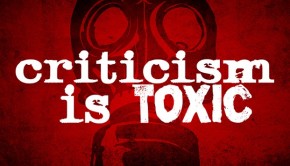 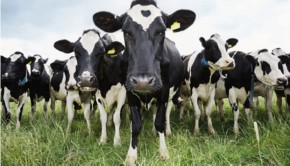 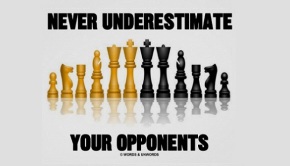 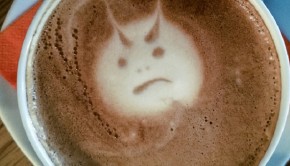 8 Responses to 5 posts in 5 days: The Food Babe vs Pumpkin Spiced Lattes